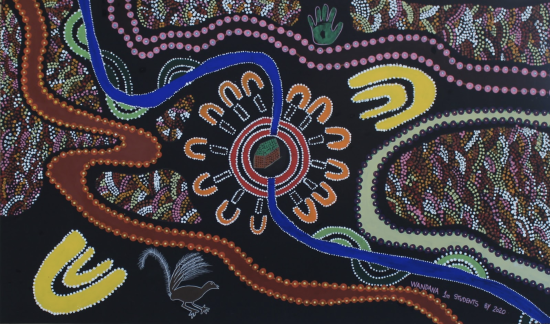 St Paul's is a Catholic parish primary school providing a safe, caring and comprehensive education to students from Kindergarten to Year 6 in Camden and the surrounding Macarthur region.

This pictured ‘St Paul’s Camden’ painting tells the story of our school – completed by the students and staff of 2018. It is a modern, contemporary Aboriginal painting which pays homage to the local people of the Gundungurra, Dharawal and Dharug nation and captures the true essence of the school community of Camden. Three distinct areas are depicted. In the North-Eastern area of the Nepean River are the Dharug people. In the Eastern Cowpastures are the Dharawal people. The area of Camden Town, the Western Cowpastures and adjoining mountains are neighbours of the Gundungarra people.

In the centre of the painting are the red circular shapes which represent a meeting place and in this case, that place is St Paul’s School. The red colour of the circles symbolises the deep connection of the Aboriginal people to the land. The white dots around the circles represent the Elders of the past. Flowing through the centre is the Nepean River with its local communities marked along its banks.

Inside the meeting place is the original building provided by John Macarthur for one Catholic teacher to educate the children of those who worked on his estate. In 1840, the Macarthur family donated the land upon which St Paul’s Catholic church was built. In 1859, a new church was built and the old church was then used as a school run by lay people. In 1883, two St Joseph Sisters arrived and began teaching classes in the old church. In 1900, a decision was made to demolish the old church, clean the bricks and erect a new school with the same bricks. The new school building opened in 1901 and is today named ‘The Heritage Hall’.

The large, yellow U shapes represent the current Elders and school leaders of the school community. Below the school is the local totem of the lyre bird, the symbol of Reconciliation.

The brightly coloured dots radiating out from the centre are the students, teachers and families of the school community and they carry the school values of ‘Truth, Love and Faith’ throughout the community.

The handprint of the school principal can be seen on the painting and represents the guidance, care and love for the entire school community.

A Catholic School in the Diocese of Wollongong

Catholic schools have a long and proud history in the Australian educational landscape. Originally established by orders of brothers, nuns and priests in the nineteenth century, they are now almost entirely staffed and led by lay people.

Catholic systemic schools in the Diocese of Wollongong are either parish primary schools like St Paul's, or diocesan secondary or K-12 schools. They are all co-educational schools. (The diocese also has another seven independent congregational secondary schools, some of which offer single-sex education.)

Catholic schools have a unique character because as well as being places where learning is highly valued, they are places where priority is given to a values-based education in the Catholic faith. This involves all staff and students proclaiming the Good News of Jesus Christ to the world. Staff identify strongly with their school and take pride in their work and the school’s achievements.

Take a Virtual Tour of Our School